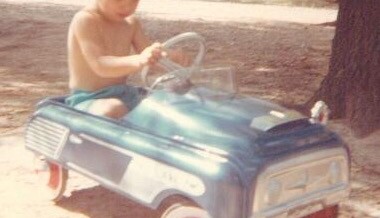 A few days ago, the oldest child in our family announced that he was looking for a truck. His current vehicle, which was born during the first George W. Bush administration, was ready for retirement.

Our family is one that drives vehicles until the proverbial wheels fall off.

He looked at a number of different trucks, and surprisingly, even though I thought he was a devout Ford man, he even considered a Dodge. Ultimately, he stuck with a Ford.

He sent us a link to the online listing of the truck he was going to buy. Opening the link, I began to admire all of the amenities the truck offered. Four doors, the long bed, and of course it had electric windows and door locks.

Then I looked at the price. It cost more than my first house.

After picking my jaw up off the floor, I realized that I had become my father. My wife has said for years that I am just like my father, but my reaction to the cost of this newer vehicle solidified her assessment.

Notice that I said ‘newer vehicle.’ This is a used truck. Or, as the salesmen call them, “Pre-Owned.” As if capitalizing the words in a hyphenated auto adjective makes it something better than “used.”

Where I have become my father is with my disbelief in what things cost. Part of this is me ceding the majority of household purchases to my beautiful bride over two decades ago.

I have lost track of the price of almost everything except for gas, tools, zero-turn lawn tractors and ammo.

As I mentioned, this family drives cars until the wheels come off, so the space between my car shopping experiences is fairly wide. Heck, my daily driver from the 80’s through most of the 90’s was a 1971 Oldsmobile Cutlass Sport Coupe that I bought for $2,400.

Which brings me to my point. Why do cars and trucks have to cost so much? My feeling is that they don’t.

My first car was a 1966 Ford Mustang. Technically, my first automobile was a 1965 peddle car that I received when I was three, but I’ll stick to cars which are propelled by a combustion engine and not the Fred Flintstone method.

It had a straight 200 cubic inch, six-cylinder motor, a three-speed manual transmission, an AM radio, manual window rollers, and a heater. It did not have electric anything, air conditioning, a computer, automatic headlights, or a woman’s voice who came out of the door speakers to tell me where to go.

Back in those days, that was the wife’s job. But, I digress.

So, here’s my idea: Someone needs to build a car with virtually nothing on it. How about we have an option to purchase a vehicle that only has what we need? A car or truck that just has a motor, transmission, manual window rollers, wipers, headlights, and a radio would be great.

Not only would no computer, no electric everything, or a lady who lives in the dash and tells me where to turn reduce the cost of a vehicle, it wouldn’t be there to break and need repairing.

Besides that, new cars have features I never use because I can’t figure them out. The rear view mirror on my car has buttons that you’re supposed to be able to program to open the garage door. I spent 30 minutes one day reading the owner’s manual and trying to get it to work and never did succeed.

So, now I just use the rear view mirror to look at the traffic behind me and I push the button on the garage door opener when I need to get in or out of the garage.

When my ’66 Mustang or ’71 Olds Cutlass had a problem, I would grab two wrenches, a 1/2 inch and a 9/16, a Phillips and a regular screwdriver, pliers, a can of WD-40, and a towel to wipe my hands, and I could fix just about anything that went wrong.

Not anymore. These days, you have a different light on your dash for any given problem, none of which I can fix, so I have to take the vehicle to a mechanic or the dealer.

Me: “So, there’s a light that came on on the dash that looks like a plumber bending over.”

Mechanic: “Yes, sir. That means one of your tires is low.”

Me: “Yeah, but I noticed that the tire was low on my own before I even called you.”

Mechanic: “Now that you mention it, that does look like a plumber bending over.”

Seriously? We need a light to tell us a tire is low? And if we have to have it, why can’t it just say, “low tire?”

We also have lights to tell us it’s time to change the oil and when the temperature is below freezing.

We are paying car companies a lot of extra money for things that should be obvious to us. At least most of us.

My dad still thinks that a house should be $10,000 and that a new car should be $3,000. I’m a little more realistic than that, but I do think that we could lose most of the bells and whistles that they put on vehicles these days and we could still get where we need to go for a fraction of the cost.

However, I will acquiesce and pay extra for an air conditioner. If I don’t, there’ll still be a woman’s voice in the car telling me where to go.