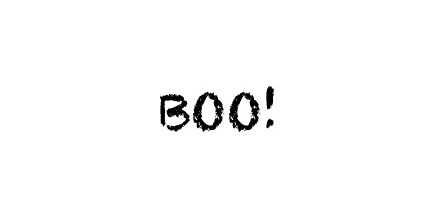 Wanna hear something really scary? If the estimates are correct, you’ll drop an average of $74 bucks for Halloween.

$6.9 billion. That was Fortune Magazine’s estimate in 2015 for the total amount Americans spent on Halloween. That included candy, costumes, and decorations. This year likely will be close to the same totals.

So, why do we celebrate Halloween? What makes us shell out hard-earned cash for large quantities of candy and dress up like ghoulish figures and politicians? Please forgive my redundancy.

According to the online Irish Geneology Toolkit, Halloween and the way we now celebrate New Year’s have something in common. Both have a lot to do with, “Out with the old and in with the new.”

Some believe that Halloween traces its beginnings to the festival of Samhain, which is part of Ireland’s ancient Celtic past. One aspect of the festival required druids (well-educated Celtic people) to participate in a fire festival on the evening of October 31 and throughout the next day. Old fires would be put out, and new ones would be lit.

The dates marked the time when the cold part of the year arrived, when crops no longer grew. Consequently, it was associated with death. The celts believed that the dead and the living walked the earth together at this time. Keith Richards and Nancy Pelosi offer some modern proof of this theory.

As Christianity became the dominate religion, many of those who had followed the Celtic practices became labeled and were accused of commiserating with old beelzebub himself.

Some believe that Halloween has Christian origins that honor the dead. Other Christians want nothing to do with anything related to Halloween.

But, like many traditions, you can try and squash them, but it’s hard to completely eradicate them. And so, Halloween is celebrated differently in different places. But in America, we mostly focus on wearing amusing costumes, bobbing for apples, and overdosing on candy.

My earliest memory of Halloween is sweating. In 1966, the campy TV show Batman was the biggest thing on TV. I wanted to dress up like Batman that Halloween, and so my mother went to the Ben Franklin Five and Dime and found the costume. The mask was so stiflingly hot, that as I walked through our neighborhood, sweat squished between my little four-year-old face and that cheaply-made Bat Mask.

Mind you, it’s fairly cold in Arkansas on Halloween, so that mask obviously didn’t breath at all. But, I thought I looked good.

As my mom followed closely behind and beside me on the road in her ’60 model Buick, I would walk from house to house, Bat Cape flapping in the wind.

“Twick or Tweet,” I would say when they opened the door.

The little old ladies were the most generous. They would fill their tiny hands with piles of Tootsie Rolls, bubble gum, and suckers, and drop the heap into my grocery sack. The darkness was no deterrent for me, but my mom eventually called time, and I had to get in the car to go home.

My dad sorted through all the candy after we got home, and he doled out a few pieces of candy to each family member. We laughed and enjoyed the fruits of the evening’s haul, and then it was time for a bath and bed.

My mom put up the candy on a shelf in the pantry, and I was allowed to have just two pieces a day until the candy was all gone. I don’t recall how long it lasted that year, but I recall the candy haul each subsequent year lasting up until December.

Halloween isn’t the most expensive holiday for most of us. As far as what we spend, it ranks behind Mother’s and Father’s Day, Valentine’s Day, Christmas, and believe it or not, The Super Bowl. The Super Bowl isn’t technically a holiday, but due to the amount of dough we drop celebrating one football game, it’s worth mentioning.

I no longer dress up for Halloween, and very few kids ring the doorbell these days on October 31. But, when they do and I open the door to the words, “Twick or Tweet,” I can’t help but think back to a four-year-old boy with a sweaty face and a Bat Cape.

That kid is now glad to spend $74 to help some children build Halloween memories of their own.