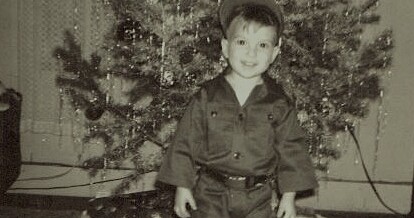 Santa came to our house on Christmas Eve, before we went to bed. Some of my friends had to go to bed before Santa would come. Their gifts would be under the tree when they woke up.

Not me. I didn’t have to wait. My grandmother would take us for a Christmas Eve ride in the station wagon to look for Rudolph’s glowing nose in the sky.

All of the local radio stations would give Santa sighting reports. The North American Aerospace Defense Command (NORAD) would provide constant updates. The radio announcer passed those along as my sister and I would press our noses to the window and look for Rudolph’s glow. I would instruct her to look through the window on the other side of the car. That way, one of us could alert the other if he was spotted.

Somehow, while my sister and I were cruising in the Ford Country Squire, Santa and his sleigh team would have landed on the roof of our house on Beech Street, he would have slid down the chimney, and left our gifts while we were out.

Dad would always tell us that we had just missed him.

My sister and I had seen Santa and talked to him at Sears and Roebuck; even had our picture made with him. But, I wanted to see him again on Christmas Eve. My sister was a little more wary of St. Nick. The pictures taken at Sears reflect that.

After arriving back home to the toys and gifts under the tree, Perry Como, Andy Williams, Dean Martin, Bing Crosby, and Nat King Cole would sing. Sometimes, we would listen to them sing on the radio, other times they would be on the television.

ABC, NBC, and CBS would all put the stars on for Christmas specials. Bob Hope was frequently there. The black and white TV would play in the background. Sometimes the picture was clear, other times it was snowy.

Our stockings, that had been hung by the chimney with care, were loaded with walnuts, oranges, apples, and small gifts. There were spinning tops, marbles, and jax.

I was overjoyed one year to receive cap guns, complete with plenty of boxes of long, red ammo strips. This meant that playing cowboys and Indians was on tap for the coming days.

While we celebrated, my dad would drink Folger’s from the percolator in the kitchen. We would raid the newly-opened box of Pangburn’s Chocolate.

After we had opened our presents, my mom would have us pose for pictures. She always had us sit on the fireplace hearth and hold some of our gifts for the picture taking. The fireplace photos were first taken when we were quite small. My mom would take them each year until we left home. Those photos now reside in an Pangburn’s Chocolate box.

Later, I would continue the Christmas Eve tradition with my children. Santa would arrive before bedtime, allowing for presents, pictures, and Pangburn’s.

We would take their photos with them holding some of their gifts. Bing Crosby and Nat King Cole would sing from the CD player. The TV networks aired Christmas specials, which included the stars of the day. All were things that we continued until they left home.

Christmas traditions vary from family to family, but its these traditions that are the thread that connect generations.

Jesus is the reason for the season, but the joy the season brings to children is one of the best feelings there is. We should never lose focus of why we celebrate Christmas, but we also shouldn’t lose the opportunity to hand down the things that made our Christmases memorable to our children, grandchildren, and beyond.

And we should all take a moment each year to dig out that Panburn’s box and say hello to everyone from Christmases past. Including those who drove us around in a station wagon on Christmas Eve while Santa slid down the chimney.