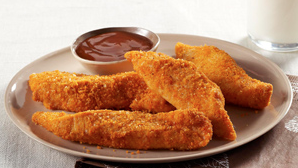 Who’s in charge of choosing and naming the food?

Recently during a night out at dinner, I noticed food names on the menu, which I normally think nothing of, but the more I thought about them, the weirder they sounded.

This, in turn, made me think of foods which shouldn’t even be food.

Some food names may be effective in selling the product, but they can also be downright creepy. And some things just shouldn’t be eaten.

Chicken fingers. Somehow, this menu item, normally served as an appetizer, has become a favorite on our restaurant plates. But the thought of some poor chicken losing its ability to count to 10 just so that we can have something to dip in ketchup is quite twisted. When you add the term ‘extra crispy’ to your chicken fingers, it becomes even less inviting. I prefer the name chicken strips.

Armadillo eggs. Unless you live in very rural parts of the South, where armadillo is considered lunch, it’s not likely that any of us want any part of an armadillo. Armadillos don’t actually lay eggs; they’re a hard-shelled mammal, just like Nancy Pelosi. I’d rather call them a cheese-stuffed, bacon-wrapped jalapeno, which is what they really are.

Fish sticks. I’m not even sure how to address this one. They were a mainstay on school lunch trays every Friday during the 1970s. I don’t know what part of the fish the stick comes from, and honestly, I don’t want to know. The only thing good about fish sticks was the half-gallon of tartar sauce they gave you to help get them down.

Hot dogs. This one explains itself. How this ever made its way into our culture with that name is beyond me. I certainly have eaten my share of these little delicacies, but a different name might have been better. At least for Rover’s sake.

Spam. Decades ago, Spam was an affordable alternative to choice cuts of meat for families trying to make ends meet. In later years, Spam became a joke. So much so, that someone decided to give the same name to unwanted email. Spam. The lunch meat whose name has become a verb.

Cheez Whiz. I can’t think of anything that needs to be added to why this name shouldn’t have been used.

And finally, mountain oysters. The ultimate proof that if you have to call something other than what it is, you probably should avoid it.